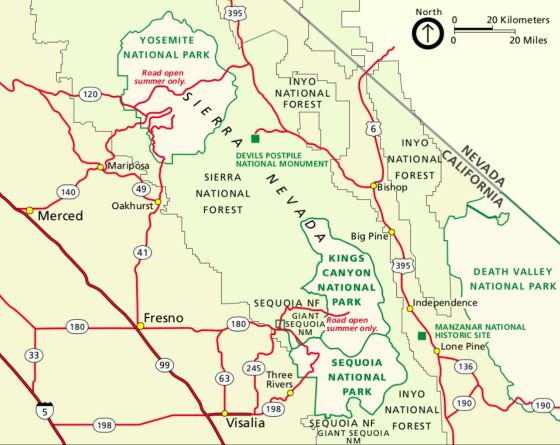 We entered Sequoia National Park from the west through Three Rivers, which was a cute little town, and we drove the General’s Highway through the winding rode with many switch backs; this road is not for the faint of heart.

On your way into the park, you will pass through many overlooks, and a very cool tunnel rock. We stopped by to check them out. I even climbed to the top of the rock if you look really closely in the photo. 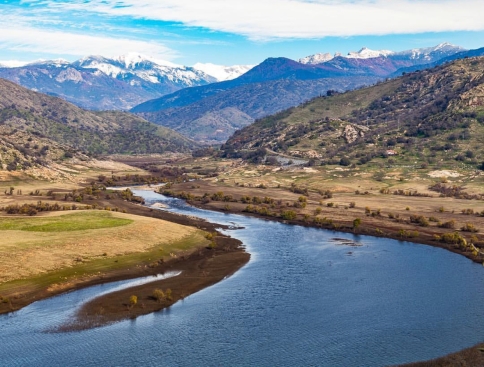 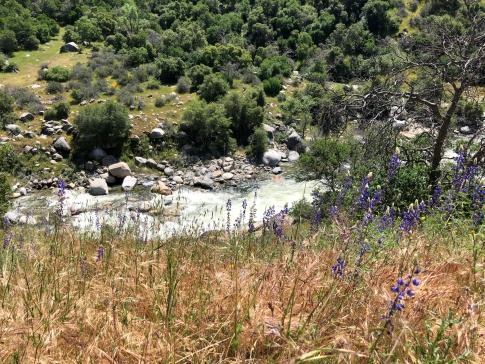 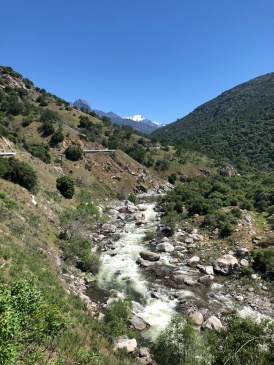 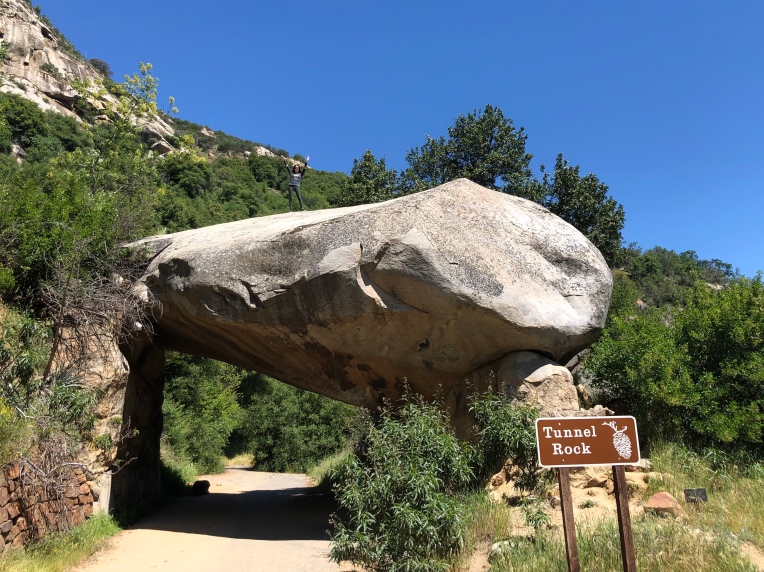 The Crystal Cave is a popular cave, that is open only during the summer, generally late May through late September. We visited during March, so we were not able to go. If you visit during the summer, I recommend purchasing tickets at a visitor center when you enter the park. 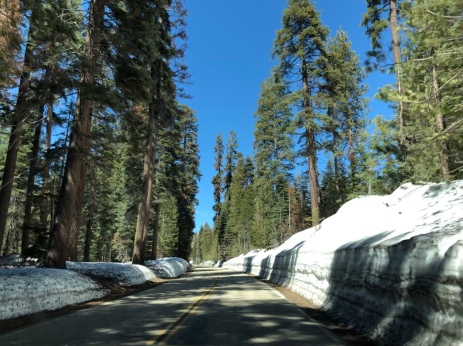 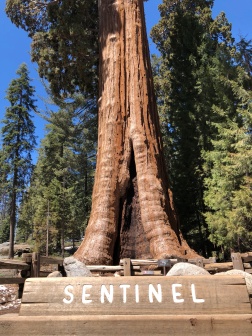 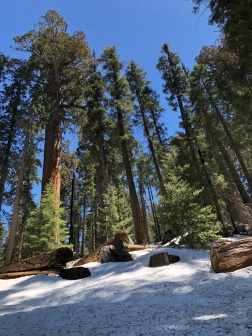 You can climb to the top of the famous Moro Rock, Climb to the top and take in views of the Central Valley and high peaks of the Sierra Nevada. To get to the top, you will climb 400 steps (0.6 miles round trip) to the summit of a granite dome.

The General Sherman Tree is the largest single stem tree in the world by volume. You can take a short hike down to see the tree, with two popular trails: the Congress Trail of Giants and the Big Trees Trail. 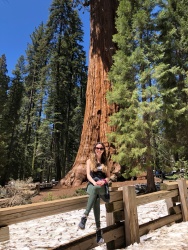 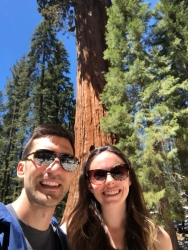 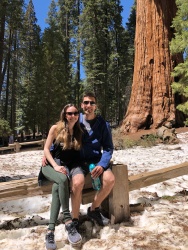 The Kings Canyon Overlook is a great stop that you can view the beautiful mountains and sequoia trees from distance.

This stop is home to the gigantic General Grant Tree, which is the second-largest giant sequoia by trunk volume. There are also many other great giant sequoias throughout the trail. There is also a hollowed-out fallen tree that you can walk through, which was pretty fun. We thought this trail was peaceful because it was not too busy.

General Grant Tree and General Sherman Tree got their names because of the great American Civil War, where Ulysses S. Grant led the Union Army in the North to win over the Confederacy, where William Tecumseh Sherman assisted him. 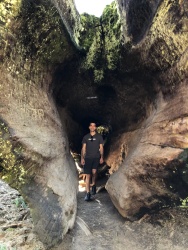 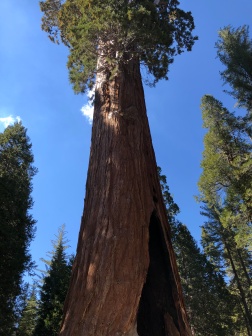 We visited Hume Lake because the main road in the park was still closed for the winter. Hume Lake is a peaceful lake down a little road, where it ends with the reserivore lake. The lake had many cabin’s around it for summer camps, so I am sure the lake gets really busy in the summer. 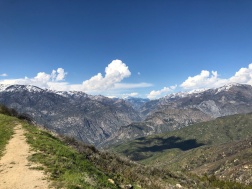 We spent the night in Fresno because it is a larger city in the middle of the parks. We stayed at an Airbnb, and we went to a really great BBQ restaurant called the Dog House Grill. Our food came extremely quick, and it tasted delicious.

Just before you enter Yosemite National Park, there is a town called Oakhurst. We visited our family friends at Chateau du Sureau, which is a beautiful castle looking hotel. Surprisingly, it was actually built within the last 20 years. We ate breakfast at the lovely The Elderberry House Restaurant, and it was delicious.

Yosemite Valley is the main part of the park, with many things to do. We parked in the  Yosemite Village Parking Lot. The valley has a free bus system which allows you to easily get around the valley. The parking lot is Bus Stop 1.

Before getting all the way down into the valley, you will drive through a tunnel, and there is an overlook that you should DEFINITELY stop at! It offers a beautiful view of the dawn wall, half dome, and all of the valley. 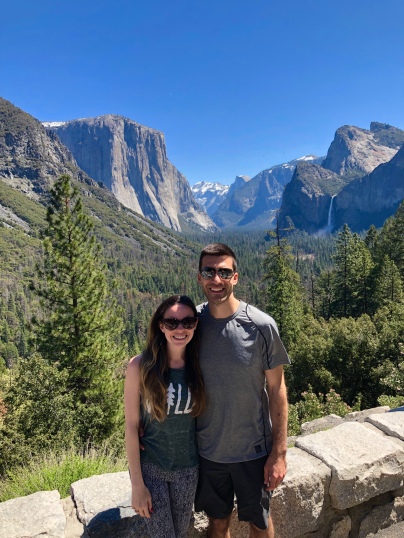 As you are driving into Yosemite Valley, you will see your first waterfall called the Bridalveil Falls on your right hand side. There is a 0.5 mile loop from the parking lot to see the falls. It is named the “bride’s veil” because of the way that the water mist creates in the wind as it is sprayed around. 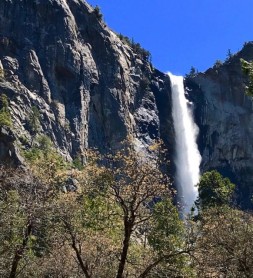 Just outside of the trail for the Yosemite Falls is the Cook’s Meadow loop. From this loop, you can see all of Yosemite, including the Yosemite falls (both upper and lower), Half Dome, and the Dawn Wall. There is a boardwalk that runs through the meadow as well as the Sentinel bridge. 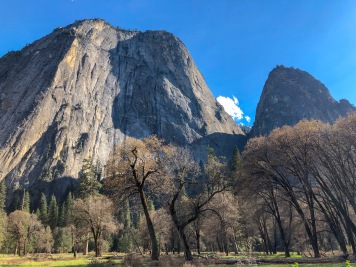 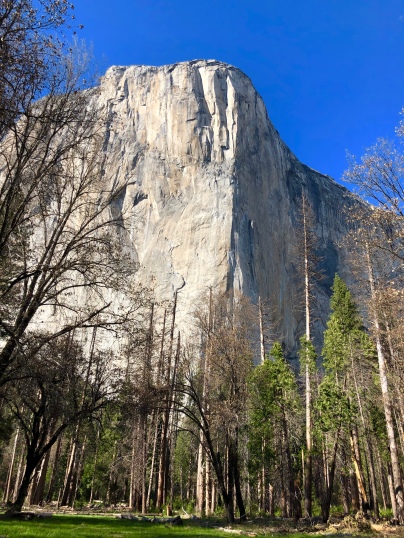 Take the bus to Half Dome Village (Stop 13), and enjoy lunch in the village. There are a few different restaurants to choose from. We opted to mostly only have snacks, and we enjoyed some prosecco as well. There are many camp sites in Half Dome Village, so it was a pretty crowded area. If you are lucky enough to get a hiking permit, you can hike to the top of half dome.

Take the bus in Half Dome Village (Stop 15) to Happy Isles / Mist Trail (Stop 16). We opted to take the easier route and only walk through the Happy Isles. We strolled along  through the Isles where they have a paved path and you can walk along the river. It was really beautiful, and it was nice that it was not crowded at all; it was extremely peaceful. 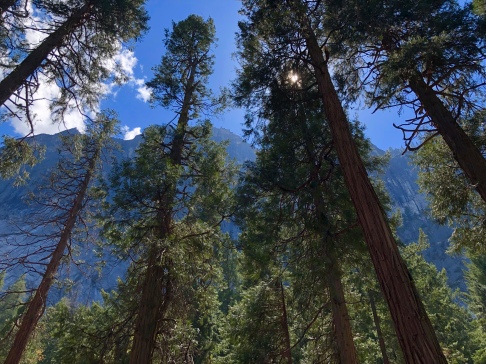 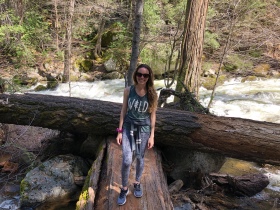 One day, if we have more time in the park, we would like to visit the Mist Trail. Our Airbnb host said that this is his favorite hike because it is usually not that crowded. The hoke is 3 miles (4.8 km) round trip to Vernal Fall, and then 7 miles (11 km) round trip to Nevada Fall, which fall a combined total of more than 900 feet (270 meters).

We did not visit here either, but you can get here by taking the Shuttle to Stop 17. The lake is named for its tranquil waters that provide a clear reflection of the surrounding mountains. We want to come back and visit this lake one day too.

Glacier Point is only open during the summer because of snow that covers the roads. We wanted to drive up and watch the sun rise over Half Dome, but unfortunately, the road was closed when we visited. Hopefully we will be able to visit one day also.

There are not many hotels located actually inside Yosemite Valley; there are many camp sites, but they sell out, so book early. We ended up booking an Airbnb on the west side of the valley in Yosemite West. It was a nice little cabin, but I would recommend staying in the valley if you can!