The first time we visited Washington, Mike and I met in Washington for a short weekend trip while we were dating long distance because flights there were really cheap for the both of us (from Michigan and from California). We packed so many activities into a day and a half, but it didn’t seem rushed at all to us. We went at the end of February, so the weather was pretty mild. We were very lucky that we didn’t have any rain. Also, the temperature was in the high 50s. Everyone kept telling us how we were so lucky it was such a nice weekend. 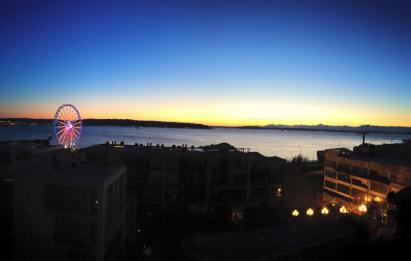 My flight got in earlier than Mikes, so I went to the gigantic Nordstrom flagship store. Nordstrom was founded here in 1901 as a shoe shop. I went shopping there and bought an extremely cute pair of Steve Madden black heals. The store was so huge, and the employees were extremely nice and helpful.

One of my favorite parts of this trip was the Food Tour we did in Pike Place Market by Savor Seattle tours. We went to 10 different vendors in the market and had delicious Daily Dozen Donuts,  clam chowder at Pike Place Chowder, Chukar Cherries, Beecher’s Handmade Cheese, Jonboy Caramels, Smoked Salmon, and many more delicious treats. The best part was that we got to cut the line and they had the tastings ready for us when we got there. The “First” ever Starbucks is also in Pike Place Market, but it was moved so it’s actually not the first. 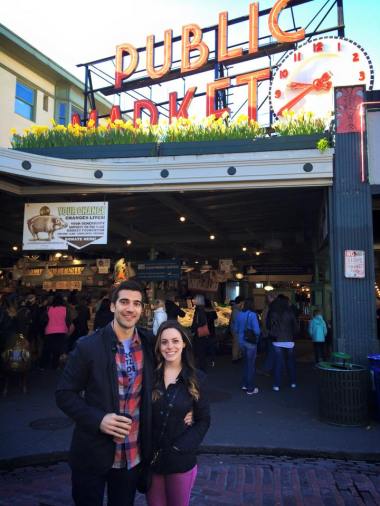 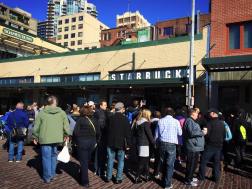 This was my favorite place in Seattle. The museum is filled with beautiful glass blown art by the artist Dale Chihuly. The museum is indoor and outdoor, and the glass is in the form of different flowers and sculptures. It is right next to the Space Needle. We never went on the tour that goes inside the Space Needle, but the view from here was good enough for me. 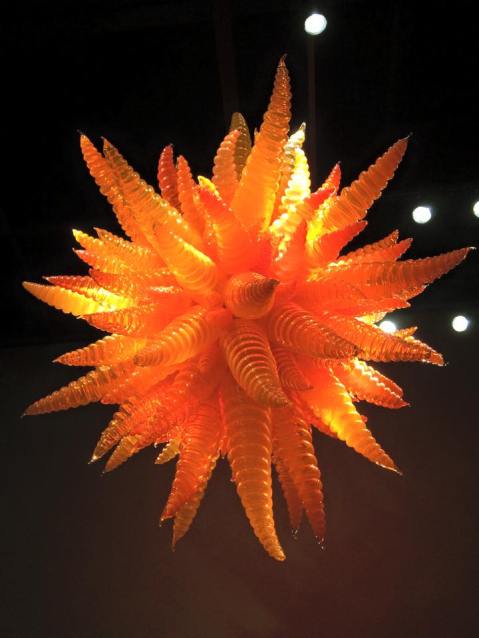 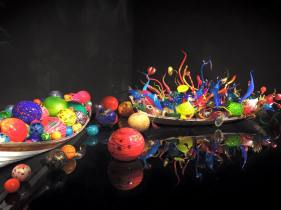 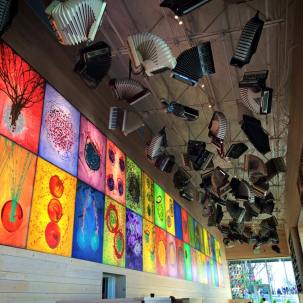 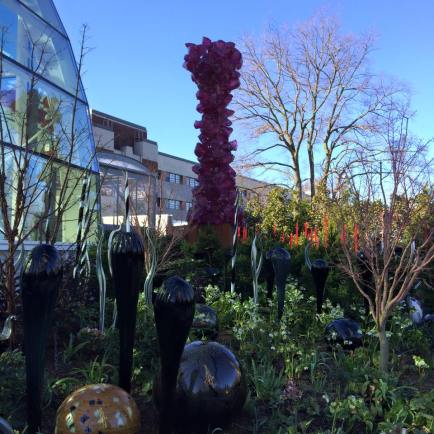 Market Theater Gum Wall is a brick wall covered in used chewing gum, in an alleyway in downtown Seattle. It was really cool to look at, but very gross if you really think about it. Travelers from near and far come and stock a piece of gum on the wall.

Kerry Park is at the top of the Queen Anne Hill overlooking downtown Seattle, Mt. Rainier, and Elliott Bay. It was little bit of a hike through a cute neighborhood to get up to the top of the park, but the view is definitely worth it.

There are so many coffee shops around Seattle. I thought that Storyville Coffee was super cute because they make little hearts on top of their drinks. Mike and I were just in the beginning of our relationship when we visited, so I LOVED it. 🙂

Another coffee spot we stopped at was Top Pot Coffee, and my favorite part about this place were the donuts! They were so good!

Inside of the Kimpton Hotel is a really cute library, bar and cafe. We just popped in to take a look around, but if we had more time or needed a place to hang out and study, I would definitely come back here!

The Seattle Central Library is an 11 story library made out of glass and steel. It was absolutely beautiful! Fun Fact: In 2007, the building was voted #108 on the American Institute of Architects’ list of Americans’ 150 favorite structures in the US. If you are into architecture, it is definitely swinging by this building! 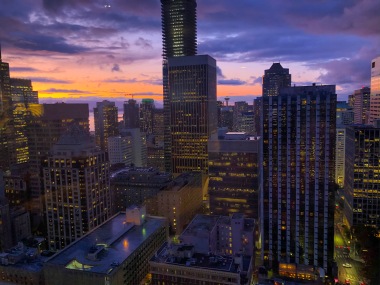 Purple Cafe & Wine Bar is amazing and beautiful! After my training, we rented the area at the top of the restaurant and had a private wine tasting for everyone in the training. They have a huge wine menu, and really great good too!

We stayed at this fun and hip hotel right downtown Seattle. We loved the pineapple theme and the cute stuffed animal dog that was waiting for us on the bed. If you are looking for a fun and cute place to stay, check out their rates online. 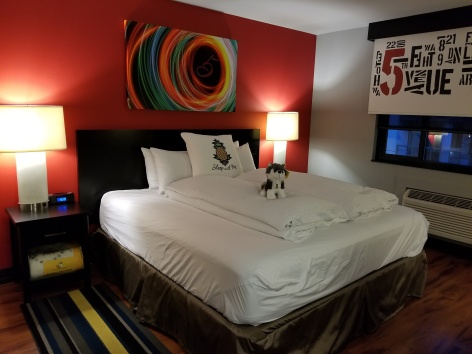 Our second trip to Washington, Mike and I went whale watching in the San Juan Islands via the Anacortes port. It was such an amazing and incredible experience. We took a tour with Island Adventures, and we booked in advance because they can sell out. ,I would HIGHLY recommend this tour to anyone. We got very up close and personal to many orca’s. We also saw bald eagles, seals, and many other animals. The staff were very professional, and they really care about the marine life. 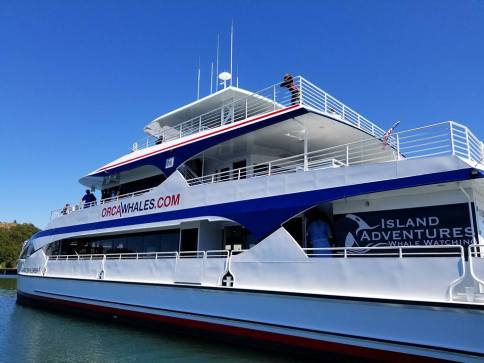 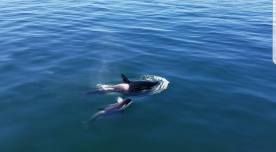 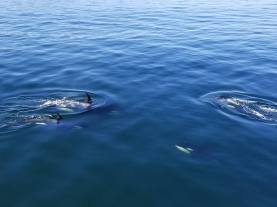 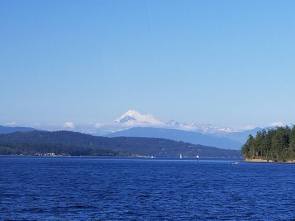 During the same trip to Washington, we drove over to the Olympic National Park, which is nearly one million acres in northwestern Washington with many different regions: forests, rain forests, beaches, meadows, mountains, and lakes.

The Hoh Rainforest was a beautiful green and mossy rainforest. We started at the visitor center, and then we hiked two easy trains: 1) the Hall of Mosses Trail (0.8 miles) which consists of maple trees draped with large growths of moss, and 2) the Spruce Nature Trail (1.2 miles), with spruce trails and fungus.

Ruby Beach was located along the Pacific Ocean, and it had a very large amount of driftwood. The beach also had beautiful boulders that jetted out of the ground that made for a very scenic walk along the coast. 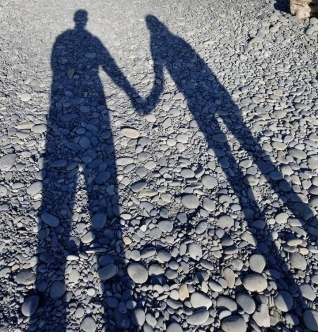 The Tree Root Cave is located near the Kalaloch campground. We parked at the camp ground and then walked along the beach looking for the tree. At first, we walked a mile in the wrong direction. We were about to give up, but we decided to try to walk the other direction, and it was actually located very close to the camp ground, just south of where we parked.

We stayed at the Rain Forest Resort Village in Quinault, and it was a very traditional little old cabin. It was perfect for what we needed, and it was right on the Quinault lake. Right near the resort was the World’s Largest Spruce Tree, so we had to check that out while we were there. It was a really beautiful site. 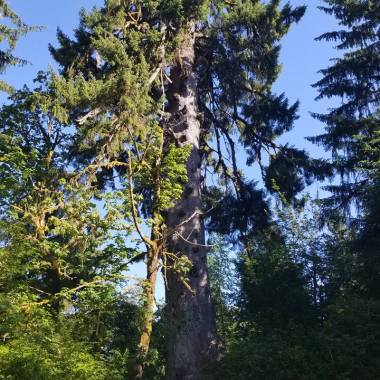 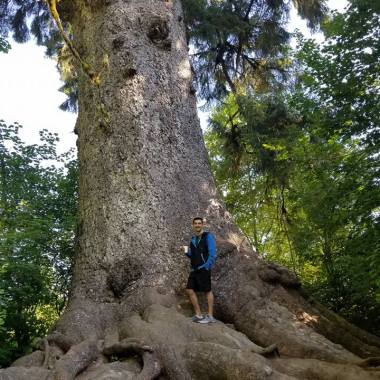 On our way from the Olympic National Park to Mount Rainier, we stopped in Olympia to fill up on gas and get some food. Olympia is the capital of Washington, so we swung by the capital building while we were there. It looked like any typical capital building, but it was a cool thing to see.

Mt. Rainier is full of many different hiking trails. When we visited, it was July, however, many of them were still closed because of the snow. We started off in the Visitor Center to learn which trails were open, and then we set off to enjoy the beauty of the mountain. Mt. Rainier was extremely packed as the mountain gets 2 million visitors per year. We started out at Mirror Lake, which is beautiful because the reflection of the lake shows up in the water. On our way out, we also saw Narada Falls, which were very beautiful. 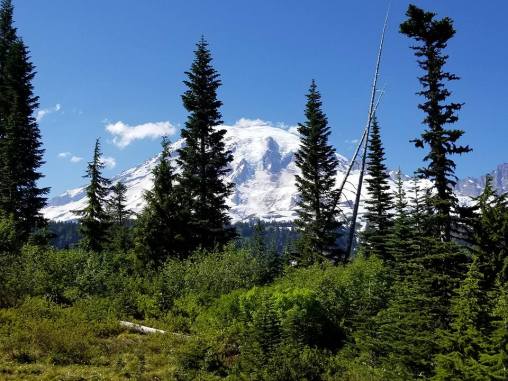 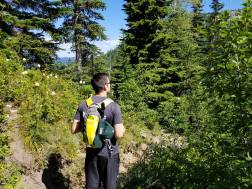 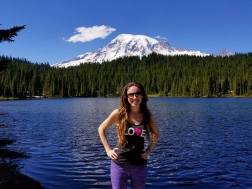 We stayed just outside of the Mount Rainier south entrance in this cute little family owned motel that looked like little cabins. The girl working was extremely nice, and we also got recommendations for places to eat nearby.

We started at the Johnston Ridge Observatory, which costs $8 per person, but we were able to use our National Park Pass to get in for free. In the observatory, we watched the award-winning films explaining the history of the eruption (they were very old films), we listened to a ranger talk and showed us animals through a telescope, and we walked along the eruption trail to take in the landscape and see how it changed. You can see views of the lava dome, crater, pumice plain, and the landslide deposits. It was really surreal to see what the landscape went through. 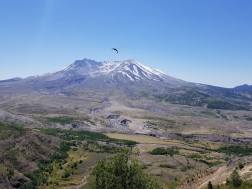 One thought on “Washington”